Dig if you will the picture — of Prince and Miami engaged in a kiss. A long, slow, wet kiss, Prince’s favorite kind, fueled by the purple passions of 55,000 rock fans gone crazy.

In the Orange Bowl Sunday night, the Sultan of Sex teased, titillated and tiptoed the legal line of decency in a two-hour set that sent waves of what parents used to call devil rhythms pulsating into the upper decks.

“Happy Easter, South Florida. My name is Prince, and I’ve come to play with you, ” said the diminutive rock star, launching into Let’s Go Crazy as he rode a rising platform onto the stage. Wearing a white ruffled shirt, long sequined coat, sequined trousers and his trademark pompadour, His Royal Badness licked his lips, wiggled his hips and sent shudders of ecstasy through the screaming crowd.

Not since 1969, when Jim Morrison of The Doors was arrested at a Miami concert for lewd behavior, has a rock ‘n’ roll star come so close to depicting onstage what Ann Landers calls The Act.

“It’s his style, it’s his clothes, it’s the way he moves, it’s the way he shakes his head, it’s the way he does everything, ” screamed Trina Reid, 14, from her upper-deck seat. Prince was a tiny glittering dot from where she stood, but that didn’t matter: “It’s just the excitement of being in the same place where Prince is.”

The Purple One slid down poles. He touched his tongue with his fingers and then rubbed them all over his chest. He lay on his back on an amplifier and sang tender words.

The most sizzling act in rock brought his band, The Revolution, to Miami at the end of a 90-city national tour. It may be his last concert for a long time. Prince Rogers Nelson, the oddly named 26-year-old from Minneapolis who loves to cloak himself in purple, has said he is retiring from the concert trail at the height of his fame, “to look for the ladder.” Even his manager isn’t sure what he means.

But his message onstage is quite clear. This is a man whose first hit record was called Soft and Wet, a man who once simulated the love act on a brass bed at a concert.

His antics have caused some heat of another kind among local civic and religious leaders. The Miami City Commission approved the Prince concert before realizing the date fell on Easter. Commissioners then denounced the singer as immoral. The Archdiocese of Miami branded Prince as sacrilegious. The city pleaded with the rock star to change the concert date, but Prince refused.

High above the hot and bothered crowd, Commissioner J.L. Plummer sat in the press box and watched Prince do Darling Nikki, an explicit song about sex.

“It’s not Prince specifically, but I don’t think any concert should be held on Easter Sunday, ” Plummer said. “But personally, I don’t care for him. I’m a little too old for this.”

The concert’s Easter timing didn’t seem to bother the fans. Sonja Ingraham was in church all day long, she said. Then she and friend Judy Pinckney put on their best purple clothes and took their children to see the concert.

“There was no way we could get out of this, ” Ingraham said.

But Laurie was unfazed: “We don’t mind the chaperones. We’re just glad to be here any way we can. I love Prince.”

Tickets to the concert said “Please Wear Purple.” Many in the crowd were dressed as outrageously as the man they paid to see.

Amy Baxter, 19, and her sister, Libby, 21, of Pompano Beach, wore what all of Prince’s women wear: lacy bodices and black fishnet stockings. They took a limo to the concert.

Amy described her costume as “Prince-soir.”

The crowd was mostly well-behaved, police said. But just as Prince took the stage, about 25 young men got a running start outside the stadium and jumped the turnstiles, knocking over a Miami policewoman. She wasn’t hurt.

There were five arrests, police said, all for ticket- scalping. Some 35 people were treated at first-aid stations for fainting.

There was such a crush of people near the stage that many who had paid $100 to sit in the “Purple Circle” down front found they couldn’t see a thing.

Before Prince came out, a frustrated Alan Sess was slowly working his way from somewhere in the 30th row to his seat in the third row, with little success. The area in front of the stage was an immovable mass of bodies.

“So far, this isn’t really worth the hassle, ” Sess said. “I paid $100 for a seat I haven’t even seen yet. I’m going to ask my friends to throw me a rope, and then maybe they can pull me to my seat by the time the concert starts.”

Luis Paz had squeezed his way through the crowds to the third row, even though his seat was in an upper deck.

“I was fighting through the mobs — the mobs, man. That was the biggest problem with the concert. But it was worth it. I paid $17.50, but I would have paid a hundred for the same seat I’m standing next to now.”

Miami may not see the likes of Prince again, if he keeps his promise to retire from live performing. The fans knew it was a once-in-a-lifetime chance to see him flaunt his stuff.

“There’s nothing that would have kept me away from this concert, ” said Sylvia Douso. “I can’t even pinpoint one specific thing that I like about Prince. I like everything.” 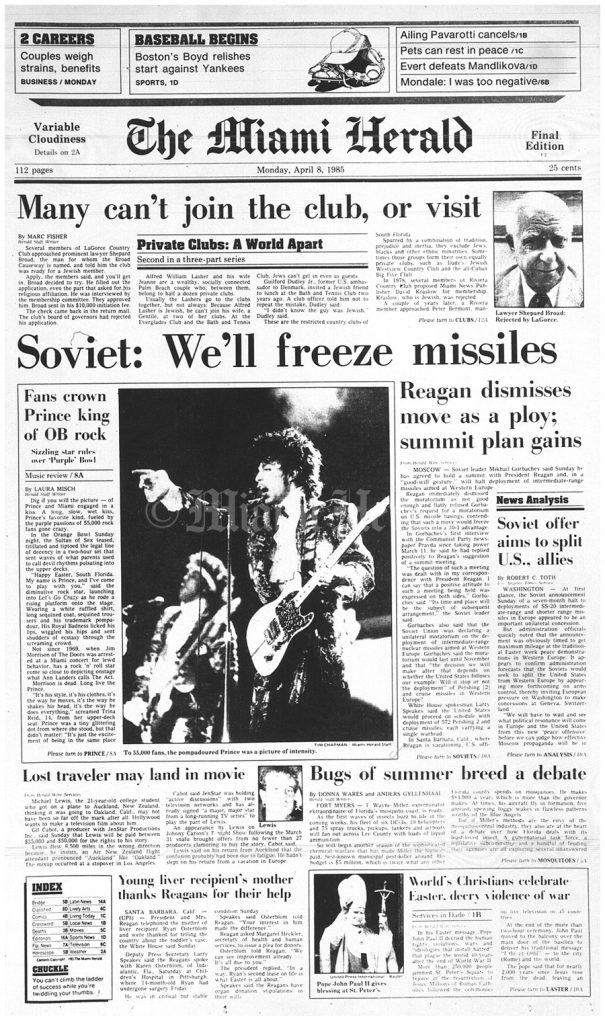 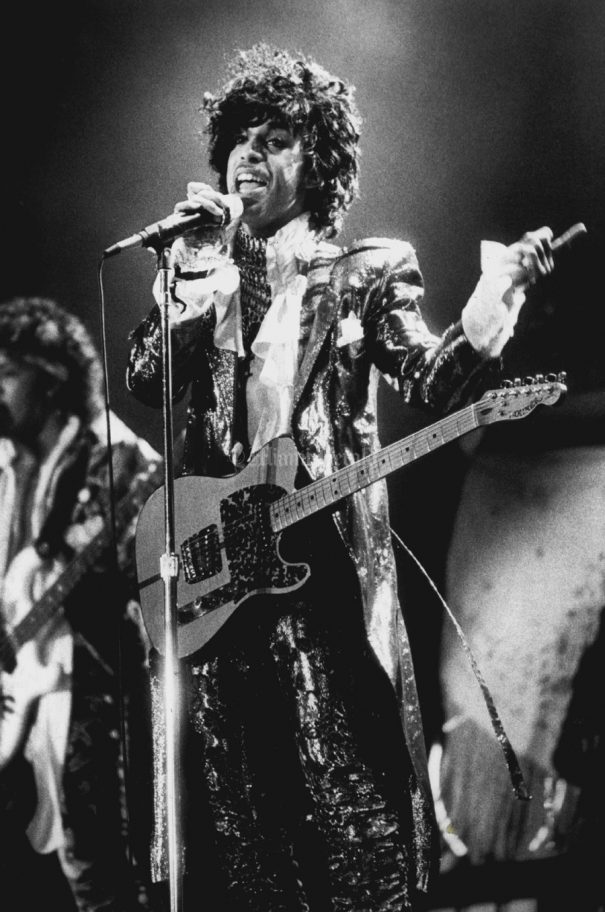 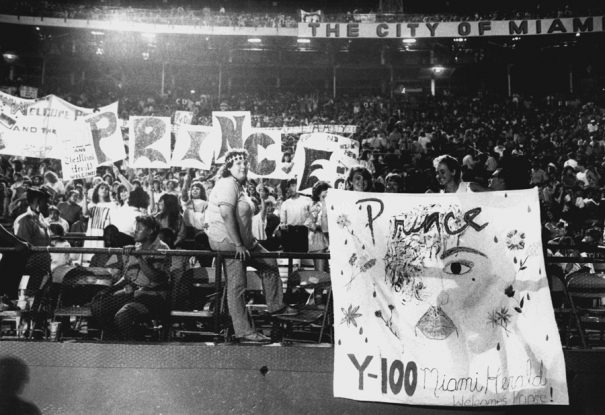 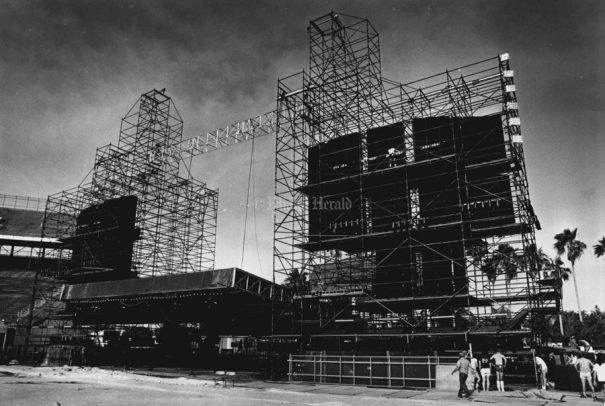 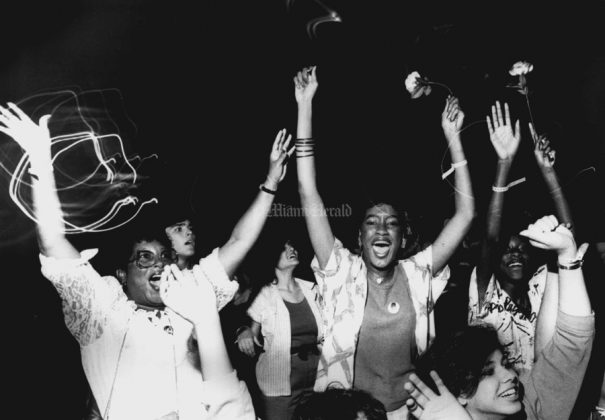 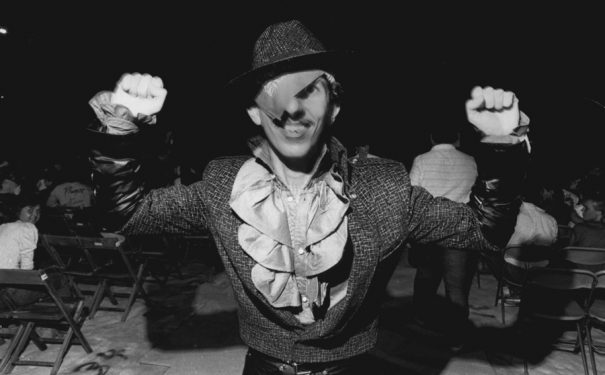