Egg-shaped and affable Alfred Hitchcock, genius of the spine-chilling thrill; and his British wife Alma are in Miami for the first time since 1939. The film and TV producer-director arrived Friday for a weekend at the Carillon Hotel. (Then they go to New York and on to their home in Bel Air. Calif.) They are a most intriguing couple. Hitchcock, who once weighed 300 pounds, has a beguiling dead pan, tinted a fascinating shade of pink. He stands five feet nine inches and is shaped like a balding Buddha. And almost as imperturbable. He occasionally flashes a weird humor. He is this side of 60.  Alma Hitchcock is button-cute – all four feet eleven of her! She has red-gold hair and greenish eyes. Her charm is genuine. “Loved the trip up,” (from Jamaica) she said in her English accent tinged with traces of Paris, Cairo, Calcutta and Singapore. “How nice to feel the sun!” “Hitch,” as Alma calls him had his TV contract renewed last month for another two years. So he took a month off on the white sands with Alma. Now he can get back to his perpetual business of snooping around again. “Saw Haiti through a broken windshield wiper.” he cracked.

“Loved the trip up,” (from Jamaica) she said in her English accent tinged with traces of Paris, Cairo, Calcutta and Singapore. “How nice to feel the sun!” “Hitch,” as Alma calls him had his TV contract renewed last month for another two years. So he took a month off on the white sands with Alma. Now he can get back to his perpetual business of snooping around again. “Saw Haiti through a broken windshield wiper.” he cracked.

Driving through Miami with the Hitchcocks was fun. “Oooh, look, there’s the Mayflower,” squealed Alma. She nearly fell out of the car looking the ship over. “An exact replica – isn’t that so, Hitch?” Hitchcock beamed with pleasure. But the next second you could see his expressive eyes tabulating the original Mayflower – its hardships, pain and triumph. “A pelican, Hitch!” cried Alma. Hitchcock added the pelican to a 1ong series of odd birds – buzzards and cranes – with a single flick of his upper lid.

“We stayed at Palm Beach in 1939″ remembered Alma. “How things have changed down here. Everything is so built up!” The Hitchcocks reminisced back to their marriage in Switzerland in 1926. “l saw St. Moritz for 30 years off and on – mostly from a bedroom window,” said Mr. Hitchcock. He is proud of his distaste for exercise. Comfort to him is utter sublimation to a soft breeze and the warm sun. But the Hitchcocks are still delighted with each other. They talk of almond trees and humming birds. The director’s eyes were diverted to a spastic – who was crossing Lincoln Road. He instantly IBM’d the story of the cripple-painting a mental portrait.

HITCHCOCK HAS A TALENT for quick pencil Sketches, too. Seldom seen are his scraps of paper with sets, faces, parts of a kitchen sink – reminders to the artists who work with him that he studied art along with electrical engineering and economics at the University of London. Like many artists, Hitchcock has an unmistakable signature. He takes a small part in each of his productions. It’s more fun for him to stick his hand behind a door to switch on a light, or to be a “silent butler” than it is to see his name in bright lights. Hitchcock is egg-shaped. But he passes up eggs on his menu. Perhaps this is because his father was a prosperous poultry dealer.’ Never ate an egg in m’ life.” he exploded fiercely. “Horrid! Once had a woman in “To Catch A Thief” stomp out her cigarette butt in a fried egg. Nice?” he asked appreciatively savoring every minute of it.

The maestro of tingling vertebrae loves this nonconformist humor.

A couple of years ago in New York, some of his friends rented a vacant mansion at 5 East 85th Street and threw a macabre supper party for him. Studio One did the decor — coffins and old cobwebs. The menu there featured “lady fingers under glass.”

HITCHCOCK HELPED THE BRITISH film industry to its feet with unforgettable films like The Lady Vanishes, and Alexander Korda’s The Private Life of Henry VIII. Tiring of arty film houses which harbored his masterpieces he went to Hollywood in 1938 for Selznick International. There he chalked up a score of suspense, films including Foreign Correspondent, Rear ‘Window, and Rebecca. His art is his knowledge that there is a thread of laughter in sorrow – even in crime. 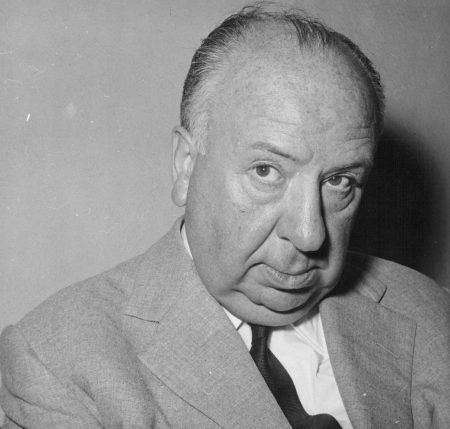 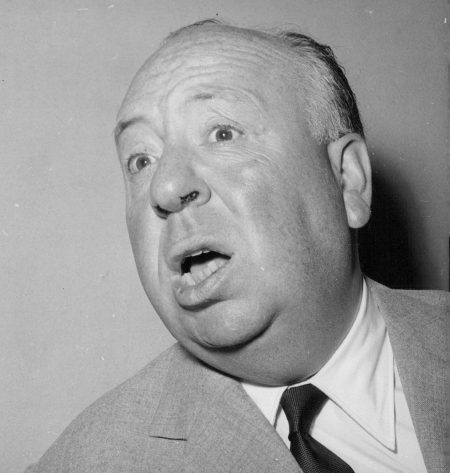 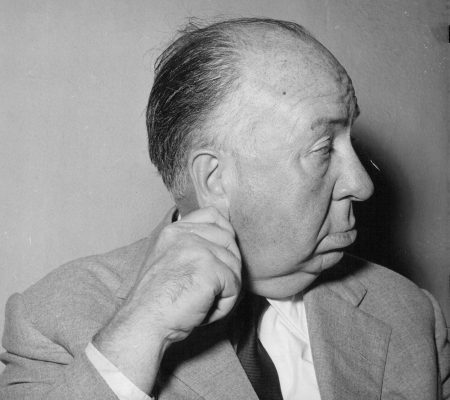 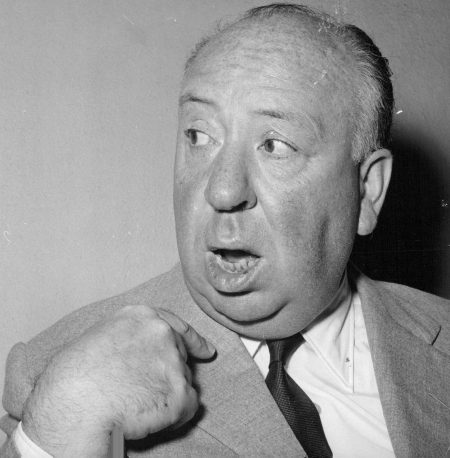 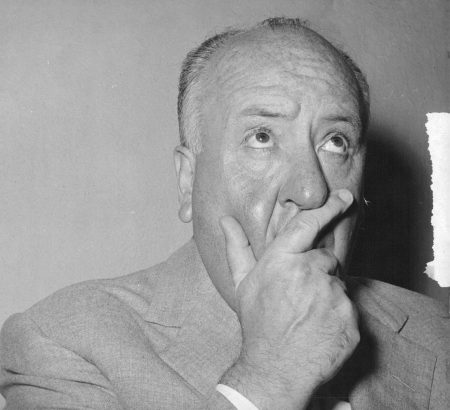 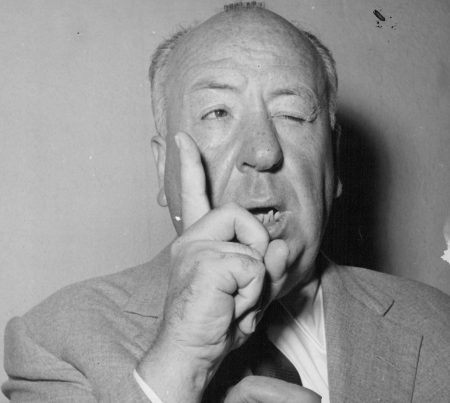 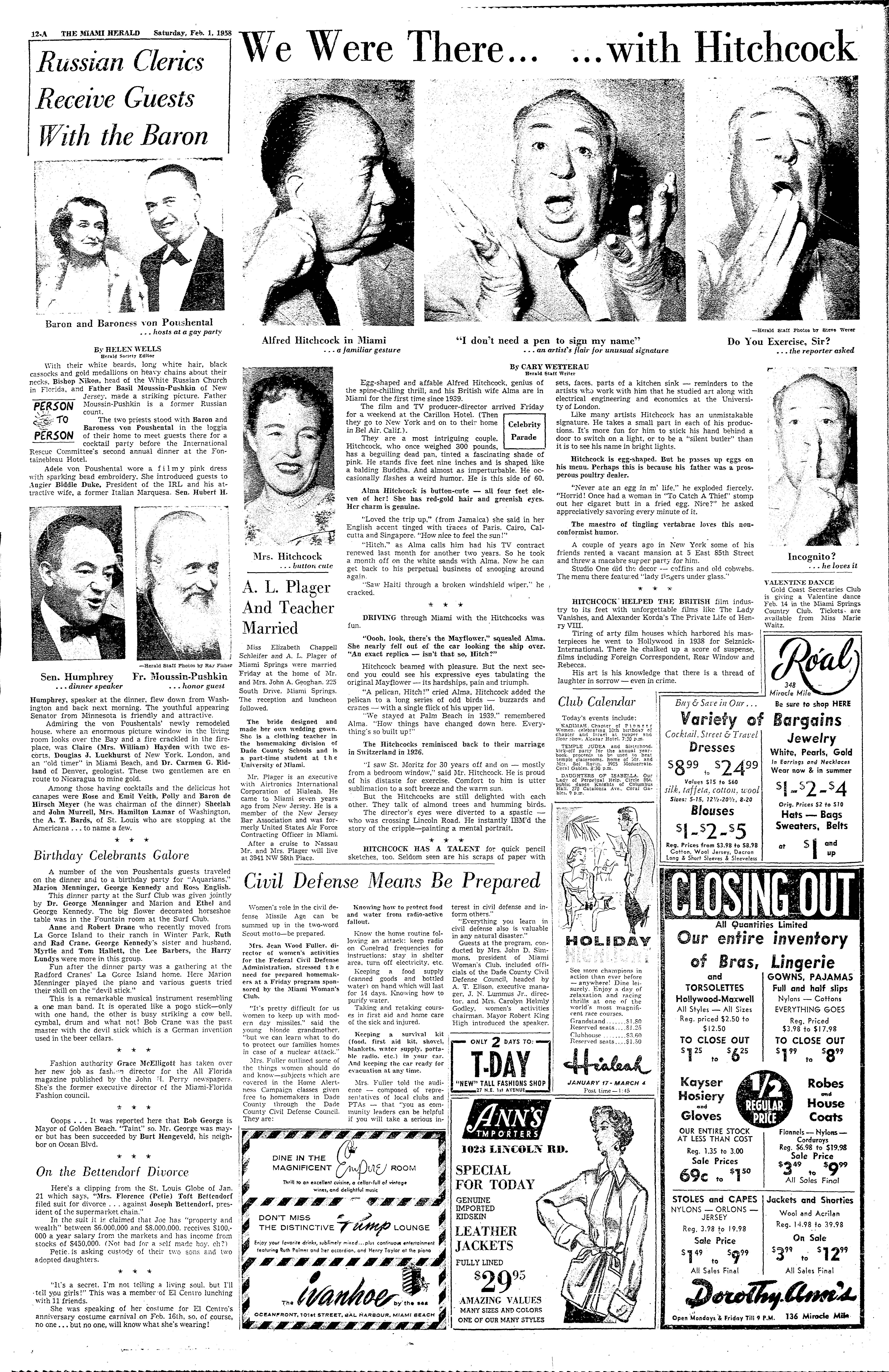